The Luftwaffe’s Carrier Plane That Never Flew From a Ship

Designed as a carrier-based torpedo bomber, the Fieseler Fi-167 ended up hunting Yugoslav Partisans when its ship never materialized.

As the only carrier airplane of original design produced by Germany, the Fieseler Fi-167 was unique among World War II combat aircraft. Its intended stablemates, the Messerschmitt Me-109T and Junkers Ju-87C, were adaptations of existing land-based aircraft. Although only 14 were built, the Fi-167 can be legitimately said to have achieved limited production.

The story of this unlikely airplane began in 1936 when construction commenced on the German navy’s first and only aircraft carrier, Graf Zeppelin. Since no German aircraft existed that could be operated from the ship, in 1937 the Air Ministry issued a specification for a new carrier-based torpedo bomber/reconnaissance plane, somewhat in the same category as Britain’s Fairey Albacore. The Fieseler and Arado companies offered competing designs, of which Fieseler’s was selected.

First flown in 1938, the Fi-167 was a large, two-bay, two-seat, single-engine biplane with folding wings and a tail hook. The preproduction Fi-167A-0 had tall, talon-like fixed landing gear; a beak-like cowling surrounding its 1,100-hp Junkers Jumo engine; and a slightly humpback-shaped fuselage that endowed it with a peculiar bird of prey appearance. That form actually followed function, however: The humped configuration was intended to improve visibility, while the tall landing gear was designed to increase the angle of attack, improving lift and drag during takeoff and landing. The main landing gear legs could be jettisoned if the biplane had to ditch in the water, and the lower wings were equipped with bladders to keep it afloat for a limited time.

The Fi-167 was designed by the same team that created the Fi-156 Storch, one of the world’s first short-takeoff-and-landing (STOL) aircraft. Like its more famous predecessor, the Fi-167 had excellent low-speed flying characteristics, a valuable asset for a carrier plane. All it lacked was a ship from which to fly.

Launched from the Deutsche Werke shipyard in Kiel in December 1938, Graf Zeppelin was 85 percent complete by the time war broke out. The carrier’s air group, Trägergruppe 186, was to be operated by the Luftwaffe rather than the Kriegsmarine, leading to some interservice conflict. Graf Zeppelin was designed to carry only 42 aircraft, and the Luftwaffe initially envisioned that complement to consist of 10 Me-109T fighters (T signified Träger, or carrier), 12 Ju-87C dive bombers and 20 Fi-167As. After 1939 the Luftwaffe altered that arrangement, limiting the air group’s strength to 12 Me-109Ts and 30 Ju-87Cs modified to serve in both the dive and torpedo bomber roles and eliminating the Fi-167 entirely. The issue was largely rendered moot, however, when work on Graf Zeppelin slowed and then was suspended in 1940 as Nazi Germany diverted its resources to other projects. 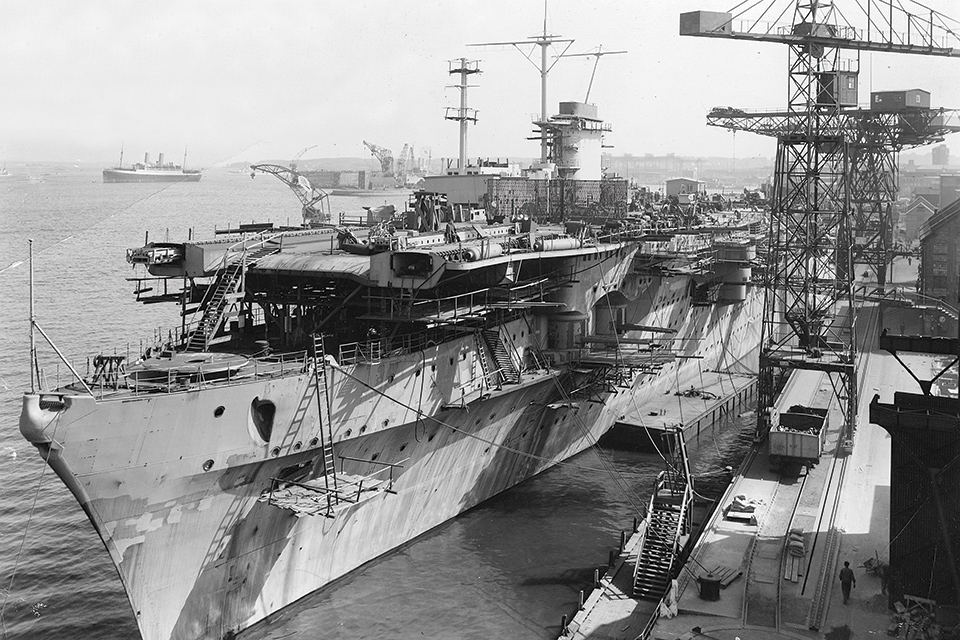 In May 1942 Adolf Hitler, impressed by the successes of British, Japanese and American carriers over the past two years, authorized work to resume on Graf Zeppelin and a group of more modern carrier aircraft. But by then Germany was locked in a death struggle with the Soviet Union and Western Allies. Given the consequent priorities placed on Luftwaffe war production, its chief, Reichsmarschall Hermann Göring, insisted that German industry could not design, test and manufacture new carrier aircraft before 1946. Although construction was never officially canceled, Graf Zeppelin would remain incomplete until it was finally scuttled in April 1945.

Meanwhile, during the spring of 1942 nine Fi-167s were organized into an experimental squadron and sent to the Netherlands. At least part of their time was spent testing different prospective camouflage color schemes for aircraft operating over the sea. They did no operational flying and in the summer of 1943 were returned to Germany. Three of the Fi-167s were then used to test landing gear components, some with the outer panels of their lower wings removed in order to increase their landing sink rate.

In September 1944 a dozen Fi-167s were transferred to the Croatian air force. One was used by a pair of Croatians to defect to the Yugoslav Partisans. It was subsequently shot down by an Allied fighter. The remaining Croatian aircraft proved useful for supplying Ustaše troops operating in the mountains of Yugoslavia.

On October 10, 1944, an Fi-167 flown by eight-victory Croatian ace Sergeant Boži­dar Bartulović was attacked and shot down by five North American Mustang Mark IIIs from No. 213 Squadron, Royal Air Force. But before they bailed out his observer, Cap­tain Mate Jurković, scored hits on one of the Mus­tangs, forcing Sergeant W.E. Mould to crash-land near Martinska Ves. It is said to have been the last occasion in which a biplane shot down a monoplane.

The Fi-167 was among the least-known aircraft of WWII, but it was Germany’s only specifically designed carrier plane. For that reason alone, it deserves a niche in aviation history.