If this bomber could talk, it would have quite a story to tell. In a way it can, as every nick and scratch, every dent, every patched hole speaks of its hard-fought service during World War II.

Martin B-26B Marauder serial no. 41-31773 came off the Baltimore factory assembly line in April 1943. Flown to Britain, it joined the 449th Squadron, 332nd Bombardment Group. Lieutenant James Farrell, who logged more missions in 41-31773 than any other pilot, named the bomber Flak-Bait after his brother’s nickname for the family dog, “Flea Bait.” Over the course of a record 206 operational missions it would more than live up to its name.

During a sortie to Amiens, France, on Septem­ber 10, 1943, a 20mm cannon shell from a Ger­man fighter penetrated the Marauder’s Plexiglas nose, wounding the bombardier and impacting the instrument panel. Farrell managed to bring the bomber home without instruments despite taking a metal fragment in a leg. Twice Flak-Bait returned from a mission on one engine, and once with an engine on fire. It suffered complete electrical failure twice and lost the hydraulic system on one mission. Yet during 725 combat hours, not one of the estimated 300 crewmen who served on the airplane was killed. 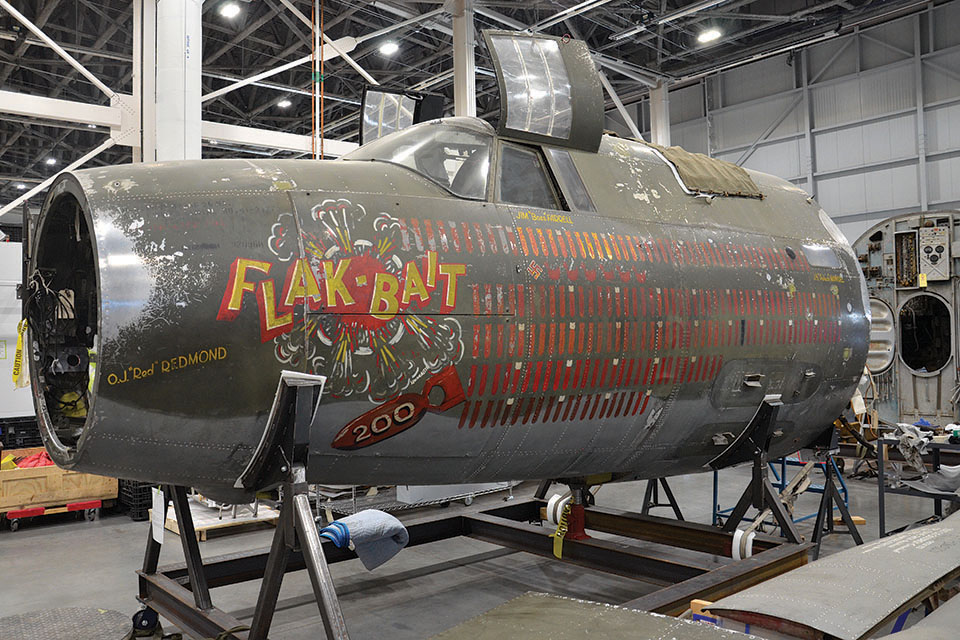 Work is underway at the National Air and Space Museum’s Udvar-Hazy Center to conserve and reassemble the celebrated bomber for permanent display. (Carl von Wodtke)

“What a piece of junk,” pilot Lieutenant Sher­man Best, who flew 14 missions in Flak-Bait, is said to have remarked on first seeing the beat-up bomber. With paint chipping everywhere (Marauders lacked a primer coat coming off the line) and numerous “scab patches” over flak damage, it had the appearance of a patchwork quilt. But by the spring of 1945 everyone wanted to serve in the “lucky” bomber. Its final mission was flown by the group commander, his chosen pilot from another squadron and a hand-picked crew.

Since January 2015 Flak-Bait has been undergoing conservation at the Smithsonian’s Udvar-Hazy Center in Chantilly, Va. “Conservation” is today the most important watchword applied to a historical artifact like this. “It’s not about the art of re-creating something,” says National Air and Space Museum Aeronautics Department Chair and Curator Jeremy Kinney, “it’s the art of preserving what’s there.” Kinney says that the museum has been “moving toward a very preservation-minded attitude in everything we do.”

Whereas in the past chipped paint might have been removed and the area repainted, the art of preservation requires countless decisions based on “chipology.” Rounded chips—indicating historic wear—are left alone while scratches and dents made during the bomber’s disassembly and subsequent moves are repainted. Areas such as two bare spots on the forward fuselage section that literally millions of hands touched while it was on display at the D.C. museum will be “end-painted” to eliminate the wear. On the underside of the wings, faint traces of D-Day invasion stripes—reportedly the only surviving examples—can still be seen and will be left as is.

“There are just over 1,000 patches for flak damage on this airplane,” notes Kinney. “If it wasn’t structural—didn’t need to be patched—they didn’t patch it.” So when conservators removed a wood floor panel, for instance, they found a hole in the bulkhead from a piece of flak that had penetrated the fuselage and become lodged in the floorboard. The metal shard is still there.

Plans call for the three fuselage sections to be joined this year, and Kinney reports, “We’re hoping that at some point in the mid-2020s this will be complete and on display” at Udvar-Hazy, though delays are likely due to the coronavirus pandemic. “We’re not rushing things,” says the man responsible for this priceless artifact. “The main issue for us is to make it authentic.”